MAY 15, 2019 - Congratulations to Shakopee High School Junior Gautham Nair and Sophomore Anjali Thomas. They both advanced to the National Individual Events Tournament of Champions. The speech tournament was held May 10-12, 2019 in Omaha, Nebraska. 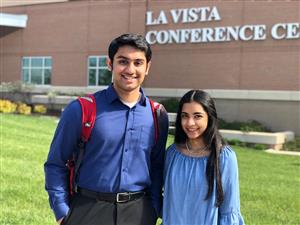 In addition, Nair and Anjali Thomas qualified for nationals. They traveled to the National Individual Speech Tournament of Champions in Omaha, Nebraska earlier this month.

“They competed with nearly 1,000 students from around the country that also had to qualify for the tournament with high placings throughout the 2018-2019 speech season,” said Head Speech Coach Katie Wilson. “Gautham competed in Original Oratory and Anjali competed in Dramatic Interpretation. This is a HUGE achievement for our students and school community.”